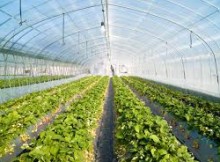 Starting plants in a greenhouse can help you have healthy crops that will grow well after you transplant them to a garden. Different plants take varying amounts of time to germinate before they can be transplanted. The decision on when to plant seeds in your garden will depend on whether you want to grow cool-weather or warm-weather vegetables.

Start cool-weather vegetables, such as broccoli, cabbage, cauliflower, and lettuce, in your greenhouse in March. The temperature should be between 55 and 65 degrees Fahrenheit. Hardy and cool-season crops usually need seven to 12 weeks to germinate. Harden off and transplant them starting in April.

Warm-season vegetables, such as tomatoes, vining beans, cucumbers, legumes, squash, peppers, eggplant, potatoes, peas, corn, and melons, should be started in a greenhouse in March or April. These plants are not frost-tolerant and generally germinate in four to eight weeks. If you live in a higher elevation with freezing temperatures in early spring, you might want to wait until mid-April or early May. If freezing temperatures are rare in your area, harden off and transplant your warm-season crops after the average temperature is at least 70 degrees Fahrenheit. This planting schedule also applies to warm-season ornamental annual flowers.

In a temperate region, you can start a second crop of cool-season vegetables in July and August. You can harden off and transplant these crops in late August or September and harvest them from late fall through early spring.