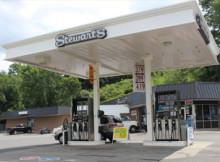 Surprisingly, sometimes canopies are not considered to be a good thing, especially when they are involved in small town politics. Usually the concern involves someone who thinks that a new canopy will be unsightly or will block a specific view of a natural landmark or other such local element.

The Manchester Journal recently carried a story about the near-rejection of a proposed canopy over gas station pumps at a local Stewart’s chain store:

“The Design and Development Review boards unanimously approved the proposal by Stewart’s Shops to install a 20-foot by 71-foot canopy over their gas pumps last Wednesday night.

In order to meet the setbacks, Real Estate Representative for Stewart’s Shops, Tom Lewis, said the company will move the pumps 10 feet to the north. Another issue that was of some concern was lighting. However, Lewis said that the new LED lighting that the company will install in the existing fixtures will reduce spillage out to the sides of the area.

At the start of the meeting, planning director and zoning administrator, Lee Krohn, said he had received two letters asking the boards to reject the canopy proposal and one in favor of it.”

I’m not entirely sure what the hubbub over rejecting this specific canopy would be about, aside from the light issue mentioned. I can see there being a nice traditional Americana touch to a gas station with standalone pumps, but at the same time, I really don’t want to get soaked in a rain storm or covered in sleet when I’m filling my car with gas.

Canopies are excellent products for just such a type of coverage. If you’re having a party, simply put up a canopy and you have a portable shelter for people to use as coverage from the sun or bad weather! What’s the big deal Manchester?