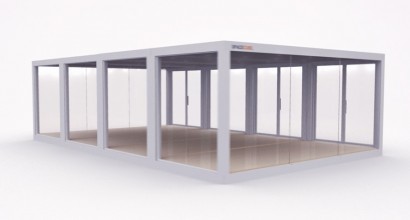 Jeremy Fisher founded Spacecube, an Australian company that is expanding into New Zealand. The company creates Lego-like structures designed to be used for temporary displays and high-end retail buildings.

The temporary buildings consist of flat-pack modular, aluminum-framed, glass-paneled buildings. They are based on the design of shipping containers, but they have higher studs, which makes them easier to store and transport. Up to three of the cubes can be stacked on top of each other. They are strong enough that terraces can be built on their roofs.

Fisher saw a niche while he was working in the inflatable architecture industry and providing inflatable displays for clients. He realized that there was no option that existed between marquees and “permanent” temporary buildings. Fisher saw that many companies were no longer satisfied with marquees but did not want to incur the expense of creating traditional temporary buildings.

Fisher created Spacecube in 2012 to serve that need in Australia. The company just began a joint venture with Eventbase, a New Zealand company, to rent the cubes in New Zealand.

The cubes are intended to provide clean canvasses for companies to decorate in creative and innovative ways. Companies see the temporary buildings as a way to set themselves apart and showcase their brands and products.

Fisher sees opportunities for growth at events, as temporary showrooms for building developers, and as alternatives to billboards in public places, such as city centers and airports.

Spacecubes have also been used for other purposes. National Australia Bank created a bank branch that can be constructed in a disaster zone where existing infrastructure cannot be used. Some customers in the United States have bought, rather than rented, Spacecubes and used them to create permanent event facilities and a home.