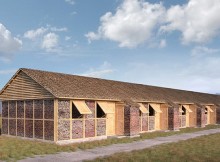 Japanese architect Shigeru Ban is famous for his innovative buildings that are designed to help the victims of natural disasters around the world. He contributed to the effort to rebuild following the earthquake that struck Nepal in April by designing temporary shelters for local families. Ban has created other structures made from a variety of materials, including paper, following other natural disasters, such as earthquakes in Haiti and New Zealand.

The initial prototype for the temporary shelters was created in Japan. Ban traveled to Nepal to create the final version of the temporary buildings. The structures used a traditional Nepalese method of making window frames.

People whose brick houses were damaged were afraid to live in them because they were concerned that they might collapse. The temporary buildings used brick from collapsed buildings for walls.

The walls were assembled by connecting modular wooden frames infilled with brick and covered with plastic sheets. This design made the building process quick and simple. After a roof was added, the buildings could be occupied immediately. The roof trusses were made from local paper tubes.

Students volunteered to help prepare to assemble the buildings. Local architects and companies coordinated construction of the temporary shelters.

The project gives hope to those whose homes were damaged or destroyed by the earthquake, improves living conditions for low-income families in the developing world, and stimulates local employment. Over the long term, the plan is to develop low-cost prefab housing similar to the type Ban created in the Philippines.