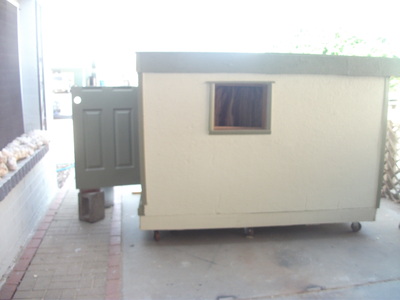 Shannon Palermo of Glendale, Arizona began building portable homeless shelters that she calls Shannon’s Shacks with donated materials in early 2014. Palermo’s goal is to bring together creative people to provide homes for those who are less fortunate.

Palermo had no prior building experience when she began creating the portable homeless shelters. She was determined, however, to help those who were less fortunate.

She heard about people in other states who were using recycled materials to create homeless shelters and decided to try it herself. She began requesting donations on Craigslist and Facebook of items that people no longer wanted that could be used as building materials. She said the support she received was overwhelming.

The frames for the shacks are built mostly from wooden pallets. The materials that are used for the interior depend on what has been donated. The shelters are insulated and can be pushed so that homeless residents can easily transport them from place to place. Each shack offers security with a locking door and windows that are too small for a person to fit through.

The shacks come with blankets, pillows, and sofa-beds made from Styrofoam. They also have what Palermo describes as a make-shift swamp cooler that consists of a Styrofoam box and two battery-operated fans that form a mister system.

It usually takes Palermo a week and a half to build a shack. She bases her designs on whatever donated materials she has available.

Palermo holds workshops one Saturday a month in which others can volunteer to help her build portable shacks. She and others who help her build the homeless shelters using discarded materials gathered from bulk trash, commercial waste, and excess household items. They improve the lives of people who receive the houses and also prevent those items from ending up in landfills.