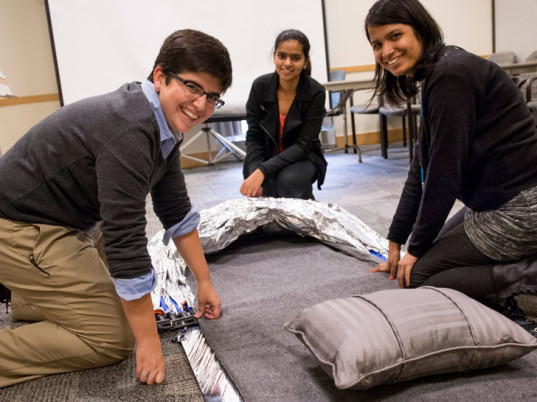 Students at Carnegie Mellon University participated in January in an “Impact-a-Thon,” a competition in which teams shared their innovative and affordable solutions to help homeless people survive freezing winter temperatures if they do not have access to traditional homeless shelters.

A team won second place for the “Satellite Shelter,” an insulated sleeping bag that expands into a tent. The Satellite Shelter is made of Mylar polyester, which is an inexpensive reflective material that is used in space blankets. The shelters have waterproof ventilation and wool blankets.

The Satellite Shelter has wheels and straps so that it can be rolled or carried from place to place. The team’s goal was to create a homeless shelter that was extremely portable and durable. The team behind the invention developed their prototype in less than a week.

Students from the Tepper School of Business, the School of Architecture, and the Integrated Innovation Institute collaborated on the project. They believe that having members from diverse backgrounds contributed to the strength of the team and their design. The Institute is studying ways to use the shelters in cities across the United States.

Hypothermia can occur when the temperature is between 32 and 50 degrees. According to a survey conducted by the National Coalition for the Homeless, many shelters across the country do not open until the temperature gets much lower, which puts the homeless at risk.