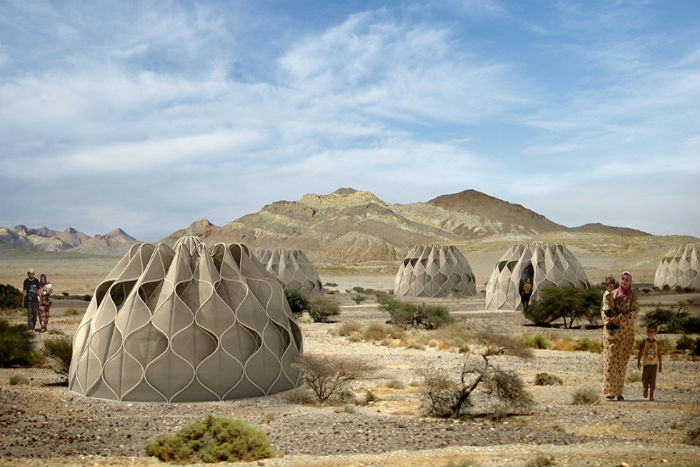 Jordanian-Canadian architect Abeer Seikaly has created portable, solar-powered shelters for refugees based on traditional Bedouin design principles. The portable shelters are constructed with a collapsible woven structural fabric and contain water and solar energy installations to provide hygiene and electricity to people who have been forced to leave their homes due to political conflict or natural disasters.

The temporary shelters have a sturdy dome-like shape and a tessellating pattern on the outside that is caused by the tent’s unique fabric. This structure makes it possible to collapse the tent vertically, making it easy to transport and set up. The shapes on the exterior can be opened to function as windows and provide ventilation.

The exterior fabric of the temporary structures can harvest solar radiation and convert it into electricity, which can be used for lighting, heating, and cooling. The shelters also include a thermosiphoning and drainage system that draws water into spherical storage tanks at the top of the temporary shelters. The location of the tanks allows the shelters’ occupants to shower.

Seikaly believes the portable structures can help refugees rebuild their lives after being displaced from their homes. She is concerned that the refugee crisis may worsen in the future due to political conflicts and climate change. She believes her temporary structures can provide the familiar comforts of a home in a new location and provide families with privacy, while at the same time helping people to connect with each other.