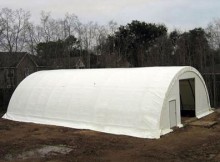 The many uses of portable buildings and shelters have long been a topic in this blog. You can use them to store items you do not have room for in your home or you can use them to store your motorcycles during the winter. You can also use canopies to protect your boats or RVs from the harsh effects of the cold winter. No matter what you use portable buildings for, you can definitely see their potential as a tool for many uses. However, portable shelters are becoming a more prominent feature in many cities where the homeless are looking for a place to stay.

I’ve mentioned this before in a previous post and the premise behind setting up homeless in portable buildings has spread to India, where portable shelters are springing up. According to The Pioneer, the government is behind a large installation of new shelters:

In addition to new shelters being installed, the article says that government officials were asked to open a number of night shelters that had been closed due to costs and low attendance. Disagreement has arisen due to the reasons for the lack of usage:

Currently there are over 110 night shelters available for the homeless to utilize in case of cold nights in Delhi. Hopefully the city government can figure out if there need to be more before it gets colder over the next few months.