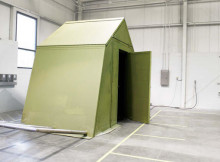 Transporting fuel around the world is an expensive job for the U.S. military that also puts troops in harm’s way. The military therefore wants to invest in technology that can help it reduce energy usage.

Ashley Thrall, who leads the Kinetic Structures Laboratory at Notre Dame, and her team have created a foldable, easy-to-deploy shelter. It is inspired by the art of origami and is designed to be flat-packed and transported on a standard airlift pallet. The shelter can be assembled in about an hour.

Thrall and her team tried to mimic the art of folding paper using origami at a larger size. They were able to fold a rigid-walled shelter into a small, compact form.

The walls are fabricated from sandwich-boards with a thick, rigid material, such as fiberglass, on the outside and a softer, lightweight foam on the inside. A hard wall offers good insulation, but the lighter inner material reduces the weight of the structure, which makes it easy to transport. The structure was tested in Chicago, and the researchers found that it had 70 percent lower heat energy demand than standard canvas structures.

The shelter is “person-portable” and is assembled using an innovative lever system. The top of the package is placed on the ground, three prongs are placed in the front piece, and it is pulled upright. Two walls are released backwards. That releases a third piece that flips forward and becomes the roof. This results in a three-sided structure.

The team is still working on how to fix the shelter to the ground and making other improvements. Several manufacturers have expressed interest in licensing the structures, but nothing is definite at this point.