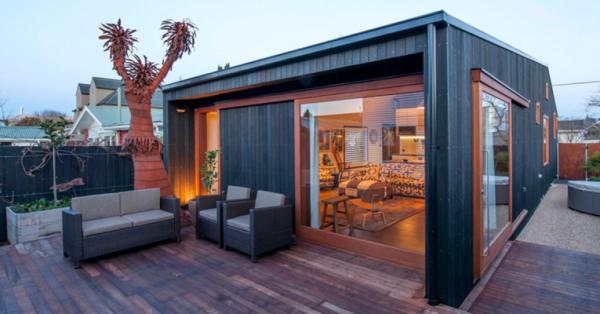 The earthquakes that struck Christchurch, New Zealand in 2011 destroyed many houses. The events caused some residents of the area and builders to rethink the way they design homes.

The Black Hut, a 97-square-meter house owned by Carolyn Hughes and Sandie O’Brien, was designed in response to the earthquakes. The house can withstand movement and can be transferred to another site on the back of a truck if necessary.

The house is built from timber lined with plywood and a timber foundation so that it would be easy to transport. It was built 4.8 meters high, which is the maximum height of a building that can be transported on a truck. The Black Hut was built with a five-year temporary permit in case the owners decide to relocate it in the future.

The portable house is elevated 600 millimeters off the ground to prevent damage in the event that flooding or liquefaction occurs. It is a long, narrow building with an open plan kitchen and living room at one end, a bathroom and laundry room in the middle, and two bedrooms at the other end. The house has an asymmetrical pitch roof. It was built angled toward the sun, and solar roof panels heat water. The walls are extra thick for insulation.

Hughes and O’Brien previously lived in a concrete and steel house in Sumner that was severely damaged by the earthquake in 2011. Instead of waiting for an insurance claim to be approved, they decided to build the smaller portable house on their 10-meter wide piece of land in Merivale.

The building was designed by architectural designers Fiona MacPherson and Case Orseby as a model for future housing. The plans can be used elsewhere. The team has also designed smaller huts that are elevated off the ground and environmentally-friendly. They want to encourage people throughout New Zealand to build smaller, greener homes.