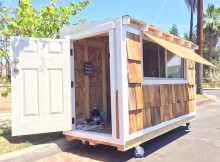 Los Angeles resident Elvis Summers decided to take action to help Irene McGhee, a 60-year-old homeless woman who goes by the name Smokie. She was living outdoors in his neighborhood, and the two became acquainted when she went to Summers’ home looking for recyclables. She had been homeless for over a decade since she lost her husband and house.

Summers was inspired by a man in Oakland, California who builds tiny houses for the homeless and decided to build a portable home himself. He spent $500 to buy the supplies he needed and built the tiny house on the street in front of his home over a period of five days.

The house has wheels so that it can be transported from place to place and locks on the door for security. Even though the tiny portable home does not have any permits, Summers says local police have told him they support the effort, as long as the dwelling is moved to a different location every 72 hours.

Summers recorded the building process and posted a time-lapse video on YouTube on April 23. It has been viewed over 3 million times. Since the story about the portable homeless shelter went viral, Summers has been contacted by several other people asking him to build them portable homes. He has set up a GoFundMe page to raise money to finance the project, which he calls “Welcome Home: A Tiny House, Huge Purpose.” His goal is to raise $50,000.

A local building supply company donated roof shingles and cedar siding for Smokie’s shelter that Summers could not afford on his own. The manager has agreed to work out a deal with Summers for future materials. He wants to use lighter and cheaper materials for future portable homes, without sacrificing the strength of the structures.

Summers wants to have people in need help him build the homes to give them a sense of purpose. He has an appointment with Los Angeles Mayor Eric Garcetti to ask for his help with the project. The city owns and controls many vacant properties where Summers believes the portable shelters could be placed to provide homes for homeless city residents, at least temporarily.