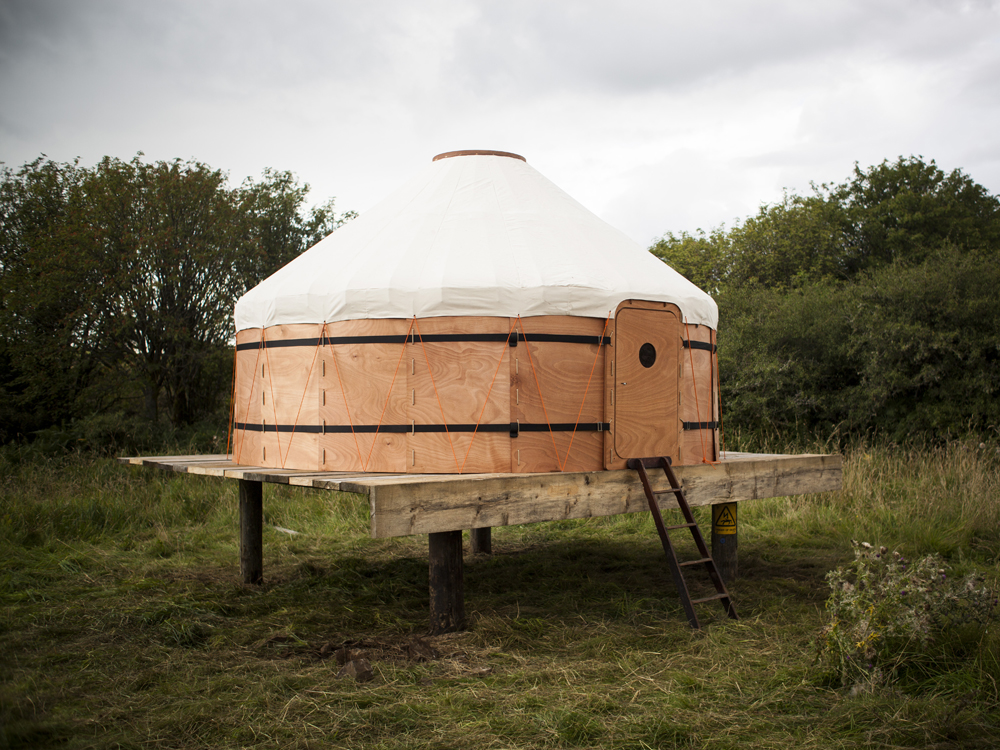 Alec Farmer, founder of Trakke, an outdoors company, and designer Uula Jero teamed up to create the Jero, a modern version of the yurt that weighs 50 percent less than a traditional version and is compact enough to fit in a car.

Yurts are usually constructed with lattice walls and stabilized by roof struts that run from the wall to the crown at the center of the structure. The design is stable but difficult to transport because of its size and weight.

Instead of traditional lattice walls, the Jero yurt uses 17 sheets of flexible, 5-millimeter thick plywood that is arranged in a circle to create a rigid structure. Wood pieces called vertebrae stabilize the 18 dowels that extend to the crown. The vertebrae are connected to two-pronged ribs that are latched to the walls. The yurt measures four meters in diameter. Yurts that size generally have 36 dowels, but by using vertebrae and ribs, the designers were able to cut the number in half and save wood.

The Jero yurt is constructed with marine plywood that can be produced with minimal waste and is strong and able to withstand harsh weather. It was designed with a computer and CNC milled to use the smallest amount of materials possible.

Each piece of the yurt is 1.2 meters long. The structure weighs about 110 kilograms, much less than the 200 to 300 kilograms of a typical yurt. The Jero can be constructed by two people in one to two hours.

This is not the designers’ first experiment with minimalistic living. Jero gave up his apartment and most of his possessions six years ago and lived in a yurt in Cologne, Germany that was small enough and light enough to be transported in a bicycle trailer. Farmer spent a period of time living in an 8-foot-by-8-foot portable micro-house.

Yurts have been used for shelter for thousands of years. The round structures are stable, easy to assemble, and portable, making them a good choice for nomadic cultures that moved from place to place frequently.

Yurts are sometimes used today for “glamping,” or glamorous camping. The designs are similar to those used thousands of years ago.