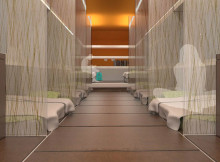 City officials in Honolulu, Hawaii are collaborating with architecture firm Group 70 International to convert used city buses into mobile shelters for the city’s homeless. Seventy old buses will be refurbished to provide homeless people with safe places to live.

The buses will be stripped and renovated using recycled materials. They will have foldable and modular beds and storage shelving to make the interior spaces flexible and adaptable for both daytime and nighttime use. The buses can be divided in the center so they can be used by two families while giving each group privacy.

The buses could also be adapted for other uses, including mobile health clinics and garden and art mobiles. The city of Honolulu wants to equip some of the buses with showers. That would cost more (about $100,000 per bus). The city would like to create buses to serve people with addictions, mental illnesses, and pets. The mobile homeless shelters will operate in fleets. Each will have a specific purpose.

The 70 buses and all of the materials needed for the renovations will be donated. The buses can be renovated by teams of unskilled workers. A volunteer organization called LIFT is helping with the project. It hopes to modify two buses by the end of the summer.

The idea to renovate the buses was inspired by Lava Mae, a program that created mobile shower buses for homeless people in San Francisco. Honolulu officials decided to use the buses as mobile homeless shelters because if they had not, the buses would have been used for as long as possible and then been stripped for parts. They thought that converting them to homeless shelters would be a better use.