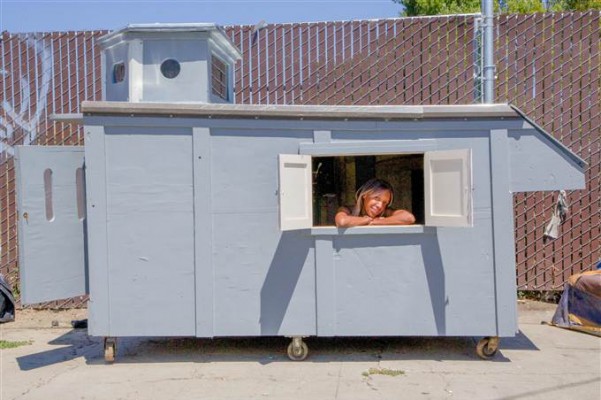 Pvgzly Addams is working with a team of friends and volunteers to build “Homeless Huts” to provide shelter for those in need in Ocean Park, Washington.

Addams designed the 20-square foot shelters, which have a box-shaped design similar to a dog house. The portable homes are made from plywood frames and are insulated to provide protection from the cold. They have large off-road bicycle tires and are lightweight enough to be pulled around easily from place to place by hand.

Addams understands the needs of homeless people well since he used to be homeless himself and lived in a tent in the woods as a teenager. It was difficult to stay warm and dry, especially on winter nights.

Governments, nonprofit organizations, and individuals who are batting homelessness have been working recently to produce tiny shelters to help those without homes. Local efforts have been launched in communities across the United States, from Portland, Oregon to Madison, Wisconsin to Greensboro, North Carolina to California. Many who are participating in these efforts believe that the best approach to dealing with homelessness is to take a “housing first” approach to address the immediate needs of homeless individuals and families.

Addams created a GoFundMe page to raise money to support the project so that he and volunteers could continue to produce the shelters. They are well on their way to meeting their goal of raising $5,000.

Addams said that he expects the first Homeless Hut to be completed by the middle of December. Rather than sell it, he plans to give the portable shelter to a local homeless person in need.