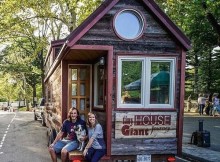 Guillaume Dutilh and Jenna Spesard are traveling across the United States and Canada with their dog in a tiny house attached to a trailer that they built themselves from scratch.

Dutilh and Spesard were living in Los Angeles in 2013 and decided to downsize and live a simpler life. They heard about the tiny house movement and decided to experiment with creating their own small, portable house. They had never built anything or gone on a long journey and thought it would be an exciting challenge.

It took almost a year to build their portable house and cost $29,328. Their 125-square-foot home on wheels is 20 feet long and less than seven feet wide. The ceilings are about 10 feet high. The inside of the house has everything they thought they would need for their journey, including hardwood floors, a propane refrigerator, plumbing, a propane cooktop stove, and a bathroom with a shower and toilet.

Dutilh and Spesard both quit their jobs and set out on their adventure. They began their trip in Shelbyville, Illinois on September 2, 2014. They have traveled through many cities in several states and park their trailer and house at campgrounds and in parking lots.

They have met many people along the way and have experienced many of the attractions that America has to offer. They recently visited New Mexico, are currently in Las Vegas, and plan to visit Death Valley soon, followed by many other destinations in the United States and Canada.

They are writing about their trip on their blog, Tiny House Giant Journey. They plan to create a documentary about their adventure after they complete their trip. Their dream is to pursue careers in travel journalism. They often showcase their home at Tumbleweed Workshops, where people come to learn about tiny houses.