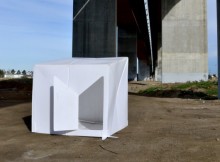 Australian social entrepreneur Alastair Pryor has created the Compact Shelter, a 35-pound foldable construction designed to provide housing for disaster victims. The collapsible tents can pack flat to transport and can be set up in just two minutes.

The shelters consist of a four-walled room with a door. When opened, the Compact Shelters measure 6.5 x 6.5 x 6.5 feet, making them large enough to provide sleeping space for two adults and two children. The shelters’ modular design allows units to be connected to create larger shelters or multiple rooms for large families.

The Compact Shelters are constructed with UV-stabilized polypropylene plastic, which is durable and weather-resistant. The twin-walled material is thermally insulative to be able to withstand extreme heat and cold. The tents were extensively tested by various relief organizations and found to be well suited for harsh weather conditions. The materials used to make the shelters are 100 percent recyclable. Manufacturers can melt down the polypropylene building material and reproduce it.

The shelters have manually-operated vents to allow them to adapt to different climates. Cool air enters through the base of a shelter, and warm air is expelled to keep it at a comfortable temperature.

Pryor got the idea for the Compact Shelter when he accidentally disturbed a homeless man while working and began to think about creating a portable fold-up shelter. He later decided to create shelters large enough to house four victims of disasters. The Compact Shelters are an effective way to meet basic needs for shelter and privacy, as well as easy assembly.

The Compact Shelters will be available for purchase later this year. Pryor is currently collaborating with the charity Oxfam in the United Kingdom.