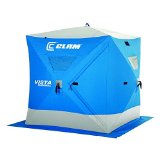 Dave Genz and his wife, Patsy, began hand-making “Fish Trap” portable ice fishing shelters in their garage about 35 years ago. Today the company they founded, Clam Outdoors, is a leader in the industry that has revolutionized the sport of ice fishing.

In the beginning, the portable ice fishing shelters that Genz made with help from friends, family, and neighbors were relatively crude. They were fashioned form cotton canvas, metal electrical conduit piping, and wood. They protected anglers from the cold and wind and also allowed them to move on the ice to locate fish.

The shelters the company produces today are lighter and more comfortable. There are over 20 types of ice fishing shelters available with optional features, such as thermal insulated material. Clam Outdoors also produces “hub shelters” with enough space for up to seven people. The company currently sells tens of thousands of its portable ice fishing shelters every year, more than any other business in the industry.

Genz sold licensing rights to Clam Outdoors to Dave Osborne in 1992. Genz still works for the company in a supporting role as a promoter, ambassador, and adviser. He attends sports shows, gives seminars, and appears on TV and radio shows.

Since Clam Outdoors was formed, ice fishing has become more of a mainstream sport. It has become more popular in part because of new and helpful electronics, power augers, and warmer clothing. It is also less expensive than traditional fishing because there is no need for a boat, motor, and trailer. Although the sport is still dominated by men 25 to 57 years old, more women and children are getting involved, too.

About 80 percent of Clam Outdoors’ business is related to ice fishing, but the company has expanded into other areas. Clam Outdoors bought Polar Sports, which makes utility trailers and accessories for ATVs and lawn tractors, in 2005. It began producing free-standing screened shelters for backyards and cabins in 2012. The company also produces collapsible camouflage hunting blinds.