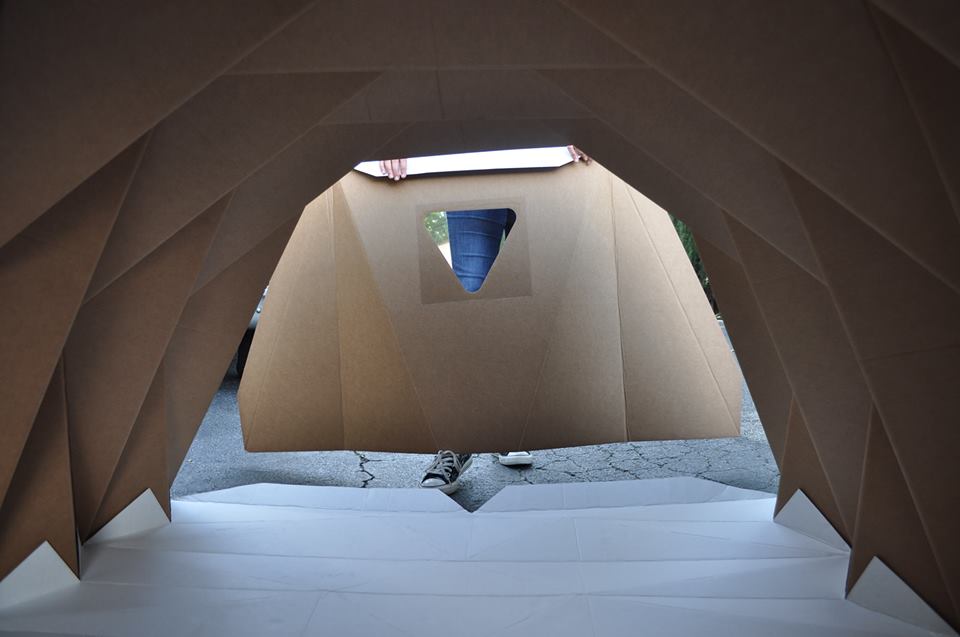 Cardborigami is a non-profit organization based in Los Angeles that creates temporary buildings out of cardboard to serve as shelters for the homeless. The organization seeks to provide people who are homeless due to poverty or natural disasters with temporary shelter until they can find permanent housing.

Cardborigami is a foldable, accordion-like shelter made of cardboard that is water-resistant, flame-retardant, and recyclable. The shelters are sustainable because they are produced locally and can easily be recycled when they are no longer needed. The shelters provide instant privacy and protection from the elements.

The non-profit organization sponsors “builds” at which volunteers gather to construct the portable shelters for the local homeless population. It takes two people only 30 minutes to construct a Cardborigami shelter. The shelters open and close in less than a minute and can easily be folded back down and transported by one person.

Cardborigami’s goal is to use innovative design to inspire people to collaborate to alleviate homelessness in the Los Angeles area. The non-profit wants to help with the transitional process of relocating and maintaining permanent housing for homeless people so they can be reintegrated into society.

A loan, grants, private donations, and awards have enabled the organization to produce 150 of the portable structures. Cardborigami also sells its shelters to serve in disaster preparedness and relief as a means of supporting itself financially. The organization’s profits are used to support its homeless aid efforts, which reduces its need to rely on grants and donations. The non-profit also holds community events to raise funds to support its work.

Cardborigami was founded by architect Tina Hovsepian. It is run by four full-time volunteers and a five-person advisory board. Hovsepian hopes to use Cardborigami as a means of employing homeless people to help them become self-sufficient.