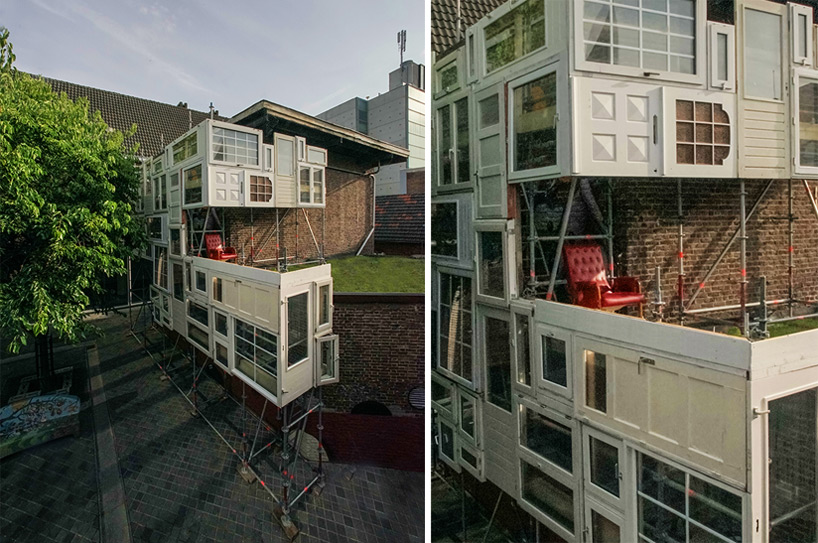 Stephane Malka was a graffiti artist in Paris in the late 1980s who later became an architect. He is now pioneering what he calls “graffitecture,” temporary buildings inspired by hip hop that are intended to change the way people think about housing and public spaces.

The temporary buildings are propped up on blank walls in vacant lots. The Bow-House, Malka’s most recent design, is located in a public square in Heerlen, the Netherlands. The house is constructed from a scaffolding structure covered with windows and doors salvaged from neglected urban buildings in the area. Malka says the windows and doors are arranged in a way similar to the way that hip hop artists sample music. The house was built in just two days.

Visitors climb a ladder to enter the Bow-House. There is a small dining room for eating, a grassy rooftop patio for sitting, and a bed for sleeping.

The Bow-House did not have to meet architectural building codes because it is classified as a temporary architectural installation. It may remain in place for up to a year.

The Bow-House was created to be an open space for anyone to use at no charge as a way to encourage public participation. Malka sees it as an extension of other public spaces, such as benches, sidewalks, or city squares. He wanted to give people a place where they would feel comfortable meeting because there were few other places where they could in Heerlen.

Malka’s work is intended as a political statement about socioeconomic problems and housing shortages in cities. He sees it as an act of resistance against the laws of the marketplace and the prevailing view of construction as a commodity. Malka intends to continue to build more of the temporary buildings inspired by hip hop.