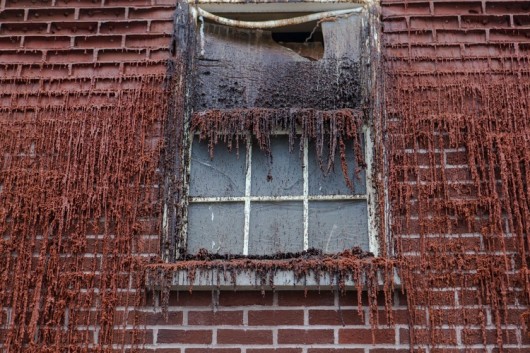 British artist Alex Chennick, who is known for his works of art that create optical illusions, created a temporary installation called “A pound of flesh for 50p (The Melting House),” a life-sized, two-story house constructed of wax bricks in a Georgian style. The house in London was slowly melted until all that remained was a pile of wax on the ground.

Over the past year, Chinneck worked with chemists, manufacturers, and engineers to create visually convincing wax bricks that would melt. The house was built at the end of September from 8,000 bricks cast in paraffin wax within beds of terracotta sand. That method gave each brick individuality, while also giving the bricks that made up the structure a consistent color.

The house was melted by Chinneck and his team manually with a handheld torch that is commonly used in the roofing trade. That gave Chinneck control over the appearance of the house and how long it would take for it to melt.

As the bricks melted and the wax dripped down, the shape of the temporary building began to warp, until it became completely unrecognizable. It was designed to be melted over a period of a month until all that remained were the roof tiles, brass door number, and mailbox.

The house was built at 40 Southwark Street in southeast London behind railings on a barren piece of land. It resembles the scale and design of a candle-making factory that stood on the same site two centuries ago.

The temporary house was constructed for the Bankside Merge Festival 2014 held in central London. The festival encourages artists to create works inspired by the history and culture of the Bankside section of London.